Why Pick Up Lines DON’T Work! 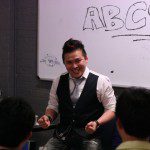 Welcome to the new and official ABCs of Attraction blog!

For our inaugural issue, I’m going to let you in on a big secret. This secret is so huge that I’m quite positive I will forever be disbarred from the Official Secret Order of Pick Up Artists… And that secret is:

Wow, what a relief to finally get THAT off my chest. I know, you’re probably thinking that’s the last thing you’d expect the so-called Asian Playboy, currently recognized on at least two continents as the Best Asian PUA (Pickup Artist) in the World, would say.

But just like in any courtship or seduction process, there’s a lot of misinformation and obfuscation out there. Not all companies are created equal and not all venusian arts dojos advocate the same methodology as the Grand Poobah himself, the famed Mystery (Erik von Markovik, a respected colleague and former teacher of mine).

Take for example, the company that I started over 5 years ago: The ABCs of Attraction.

We don’t advocate “pick up lines” in our program. As most women already know, “lines” generally don’t work. What we teach is more of an empowerment movement that is built on the idea that “If you want to get the woman of your dreams, you have to learn how to become the man of hers.”

The entire principle behind naming my company’s “ABCs” was to KEEP IT SIMPLE. Romance and achieving confidence is supposed to be as EASY as learning your ABCs. Not to make it overly complicated.

Quite frankly, I could have called it the KISS Method (Keep It Simple, Stupid). I didn’t want to overly complicate the teaching process of the Art of Seduction & Confidence, so the ABCs is actually a simple acronym that combines and synthesizes the three main parts of any man’s confidence: his words, his thoughts, and his actions.

In other words, his Verbal Attraction, his Inner Strength, and his Physical Confidence. And so the ABCs goes from A (Attitude, Attract then Approach), where Attraction literally starts BEFORE you even approach and talk to the woman, and all the way to F (Future, Fun? or Fake?!), where the adults amongst us- well- we know what that stands for.

But that’s not why you’re reading this article. You want to learn how to pick up the kind of beautiful girls that you’ve only dreamed of. After all, its in our tagline: “If you want the woman of your dreams, become of man of her’s!”

That being said, there are definite tactics that we employ that work wonders.

Here are three basic steps that we always suggest men take as they approach a woman, we call this:

Though it seems obvious to read now, when you’re making your approach, know what you’re going to say in advance. Luck (which is often what men credit their success to with women to) is merely the point in time when preparation meets opportunity, so make sure you’re prepared.

But practice makes perfect in spite- or because- of all the mistakes, failures, and successes we achieve. Ultimately, field experience is KING. After all, confidence is NOT learned… Confidence is EARNED!

83% of the information that women interpret from your communication comes from the non-verbal aspects of how you present yourself. Therefore, posture, facial expressions, and overall body language is INCREDIBLY important to projecting a cool and confident image when approaching women.

Stand up straight, as if there was a string pulling you from the top of your head. Chin up, chest out, stomach in and shoulders back; this will not only square off your posture, but it will create a more imposing and noticeable figure in the club.

It’s also absolutely essential to get things started by making masculine, confident and sexual strong first impression (what we call “Sticking the Approach.”)

Luckily, this is not rocket science; Standing tall, walking slowly and (most importantly) with a big smile, you’re going to go and open your mouth at her. While different companies have man different approach tactics and lines to win her over, we very strongly recommend walking up to her, planting your feet, and (with a big smile!) just telling her that you think she’s absolutely gorgeous and introducing yourself.

My absolutely tried and true Kamikaze Opener, that has been successfully field-tested around the world on hundreds of the most beautiful women out there, is a simple:

“You are FUCKING adorable… Hi, my name’s JT.”

This will show her that not only do you see something special about her, but you are confident, dominant, and spontaneous enough to approach and tell her. Though, it may seem frightening on paper, seeing a woman light up from a genuine compliment is one of the most beautiful and rewarding things that can happen to us men.

In my experience, having approached and flirted with thousands of women of all races across the lands, you will generally elicit 3 common reactions by going Kamikaze style:

1) She says she has a boyfriend. To which I always playfully respond with, “And how long had you had THAT problem.” This usually means you probably came off a little too needy and telegraphed too much. Or she could actually have a boyfriend. 90% of attractive women generally do. As there’s plenty of other beautiful women out there, gracefully eject from the conversation and move on.

2) She’s stunned. This is where you take control and direct the conversation. At least initially, until you’re past the social hook-point. I like to follow up with something along the lines of, “That’s a nice accent you have, where are originally from?” It doesn’t actually matter if she has or doesn’t have an accent, or if she’s white, black, or Asian. They’re usually respond that they’re from Texas or something and I’ll say, “No, no, I mean ORIGINALLY, like back in the motherland in Europe.” (Turn about is fair play 🙂 She’ll respond and I’ll comment in turn, “Really, Denmark? I actually love visiting Copenhagen, it’s far superior in my opinion to the other Scandinavian countries.” I talk a little about my travels, she’ll reciprocate, we’ll banter and flirt. Wash, rinse, repeat.

3) She lights up. Women are very rarely told that they are beautiful in a GENUINE manner. See, I told you I was going to let you in on a big secret. What’s the REAL secret to being a world-famous Pick Up Artist? It’s one I keep near and dear to my heart: “Regardless of how beautiful men may think she is, beautiful women never truly believe that they really are THAT gorgeous…”

Unfortunately, Asian men have a little bit more work to do when it comes to representing themselves as sexual icons in our primarily-white society. We can do this by presenting a dominant and confident image and by breaking free of our passive nature. But that’s another story for a later time.

So there you have it! The secret to why and how pick up lines (don’t) work.