5 Tips to Being a Confident and Alpha Asian Man 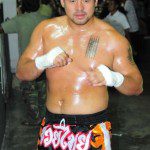 The one thing that my bootcamp students always say about me is that I am alpha, confident and dominant. What a lot of people don’t realize is that just a few years ago, I was the exact opposite. I was the nicest guy out of all of my friends and completely asexual.

Growing up in a typical Asian household I was always taught to not stand out or cause a scene or be sexual or confident or alpha.

When you look at me now, it’s easy to assume that I am dominant because I have muscle, tattoos, or because I’ve done things like fight Muay Thai professionally. It’s easy to say to yourself, “I could never be like that or that you don’t want to be like that.”

Three years ago, I didn’t have a single tattoo. I never even thought of fighting in a ring, and I didn’t have big muscles. If you want proof, look at my 2007 and 2008 PUA Summit Videos on my blog.

Being more Dominant was a choice. I knew that was my biggest weakness in pickup was being a more confident and alpha Asian man and I decided to do something about it.

This is YOUR time to choose.

No excuses are allowed, since there are many ways to become more dominant. Here are some examples.

5 Tips to Being a Confident and Alpha Asian Man:

1. Man the Fuck Up in the Competitive Social Arena – Any competitive social arena, one of the most common and most hostile to beta Asian males is the club and bar.

One of the earliest tipping points I had that made me more dominant with women is during my first bootcamp I took with JT, the Asian Playboy. I had used my fun guy, high buying temperature skills to bringing a hot girl back to our homebase but she refused to sit down. We were all really polite to her and were quite happy to have a hot white girl at the table with us but JT saw it differently.

He knew that she had no interest in me or any of my friends and was simply there to use us to get past the VIP rope. So JT told me to kick her out. At first I didn’t think it was necessarily but then I realized he was right and it was time for me to man the fuck up. So I did, I told her to leave and even pointed, gesturing with my hands. It was tough but it was a learning experience and made me grow as a dominate man.

From that day until now, anytime a girl disrespected me, my friends or tries to use us for any reason, I kick the bitch out with no hesitation. I don’t think I could have done it if it wasn’t for a bootcamp instructor pushing me, which is why I know bootcamps work, because it worked for me.

2. Lead the Men. The Women Will Follow – Next time you and your friends are deciding where to go eat, speak the fuck up and make a suggestion. The best way to make suggestions is to offer 2-3 choices, that way people still have an option but whatever option they choose will be one of yours.

Make plans, be assertive, and when you get to the restaurant, you be in charge, tell the hostess how many people in your party and be a leader. This one is simple, but it is important that if you are going to be a dominate, confident, alpha Asian man, you need to be in all aspects of your life, not just with women.

3. Do Something Dangerous – I don’t mean do something stupid dangerous. I mean take a CALCULATED RISK. There are plenty of so called, dangerous things that people will think you are crazy for doing but really are relatively safe. Examples would be:

Three years ago, I had never even trained Muay Thai, but now I’ve had four professional fights. I used to think it was fucking nuts, and every single guy and girl that I meet that finds out I fight pro rules thinks it’s something really dangerous as well. But truth is, you have a referee, medical staff, and the chances of long term injury or death are pretty small.

Things like sky diving have less risk of death than driving your car to work, and scuba diving with sharks, which I’ve done as well is harmless, it’s more the fear than anything. Challenge yourself and do something exciting.

4. Do Something Competitive – I did the world’s toughest mud run, called the Tough Mudder a few weeks ago, and even just training for it made me feel more alpha and dominant. Push yourself to the limits, know what true pain and hardship is, and do something that gives you genuine bragging rights.

5. Increase Your Testosterone – I did this and feel much more energized and naturally more alpha after I did. There is a chapter in the “4-hour body” by Tim Ferris about it but basically I just started eating more whole eggs, beef and started doing squats and heavy weights.

The most important of the above:

But out of all five things above, the one you need to start doing tonight is Man the fuck up in the club and in life. The rest of the things will help you in the long run, but first things first, you need to dig deep and man the fuck up. Why shouldn’t you be a more confident and alpha Asian man?

So if you didn’t have an alpha male father figure in your life growing up, you may need one now. 80% of my students take a bootcamp with me because of the Asian factor, they can identify with me and I can relate to them.

But really when it comes down to it, I believe that a lot of guys just need a big brother to teach them the ways of being a man and kicking their ass until they do.