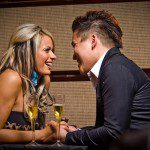 This Valentine’s Day you are going to STOP being a Pick Up Artist (PUA). Instead, your mission is to be the suave Casanova of legend. To be a great seducer, but most importantly, LOVER of women there ever was. So here are four romantic date ideas for Valentine’s Day, ie the Extra Spice to make your V-Day Extra Nice.

I’m certain that this Valentine’s Day, all of you PUAs know exactly which girl you want to take out and show the most romantic evening she’s ever known. Unfortunately, this holiday is the one day that your normally outstanding, go-to date becomes the average among dates around the world. You need to come up with new, creative romantic ideas to blow her mind.

Now, every PUA worth his salt will be going all out for women on this one, special day and just that effort risks you being left in the dust. On this day of days, she wants to feel like a Queen and it’s your job to make it happen. There are thousands of average frustrated chumps taking their girls on romantic getaways or candle-lit dinners, so your coffee-shop-to-museum-to-local-watering-hole plan just won’t hold up.

However, all is not lost.

Since we’re such a big fan of effort and detail here at the ABCs of Attraction (as well as a big fan of helping YOU get – and keep- the girl), let’s talk about four easy things you can do to separate yourself from every other guy, secure a place in her heart forever, and get a Sex and the City-worthy gossip session started among her girlfriends about your romantic stylings,  Casanova-level suavity, and amazing sexual stamina.

Whether you’re going out to dinner, having drinks by the sea-side, or taking in a romantic movie at the local cinema (pronounced with as much pomposity as possible), securing your place is an absolute MUST. Not only does calling ahead to the restaurant show you’re prepared, it also gives you the chance to arrange any special details and to talk with the Maitre D’ about any particular requests you may have.

The act of making reservations is a great time to tell them if you have a particular table in mind (girls LOVE sitting at the best seat in the house), or if you’d like a bottle of the chilled Bollinger waiting. In the case of a lovey-dovey outing to the movies, ALWAYS make sure you buy tickets in advance (online, or by simply going to the theater the day before). This can save you from an embarrassing fumble if a theater’s worth of guys has the same idea, but got there an hour before you.

Being prepared is not only an extremely attractive quality in a man, it also shows that you are considerate enough to think ahead.

This may seem pretty obvious when it comes to movie tickets or gift giving, but an out-of-the-box application of a practical idea can earn you serious points.

If you’re taking your girl out to a fancy meal at a trendy new eatery, give the waiter your credit card in advance, that way when the bill comes, it’s a simple signature and there’s no awkward (and decidedly un-romantic) question of who pays, or who to hand the check to.

This little trick can be done with cash, but it’s decidedly less glamorous and, frankly, I don’t trust it. Being suave is a MUST and can make or break a great date.

As with everything on this special day, we want to stand out and show her just how romantic, suave, and sophisticated we really are. The ability to display these qualities, however, lies solely in the details. One of the most impressive elements of style for the PUA is to add to an already sharp outfit is a boutonniere!

Yes, that’s right. I’m talking about putting a flower right in your lapel. Maybe you haven’t done this since your prom or your best bud’s second wedding, and maybe you feel a bit silly about men wearing flowers, but that’s no reason not to step up your game because if you keep doing what you’ve always done, you’re always going to get what you’ve always got. From Sean Connery’s James Bond slipping a red carnation into his white dinner jacket after slipping out of his wet-suit, post-sabotage, to…

Well… Something a little less dangerous, a boutonniere’s elegance and style will set you apart from every other guy in the room, earning her admiration and attraction.

If you have lived on planet earth for more than one of it’s rotations around the sun, you know that card-giving is a fairly common practice among us Earthlings, if not for PUAs. Valentine’s Day takes the cake for card-giving holidays and many a man has been lost at sea for choosing the wrong card for his sweetie.

I could go on for days about the art of card-giving and picking the right card, but I won’t. In stead, I will give you a tip much more valuable: The Wax Seal!

That’s right. It was common practice, in days of yore, for people to seal their letters with wax so that it was easy to tell when they had been opened by the wrong recipient. However, as time has passed, that tradition has disappeared and been replaced by disgusting adhesives on the flaps of the envelope.

This year, take a quick trip to an art supply store and get yourself a personalized wax seal (Monogrammed wax seal with wax. Approx. cost: $15!) to close up her card envelope with style. Of all my holiday PUA tips for you, this is my favorite, as it has turned my card into the talk of the table!

There you have it! Four easy ways to set yourself apart and make her swoon with romantic delight. Now, get on that planning and be sure to write your field reports!