We’ve all seen it.  Hell, even I’ve experienced it a time or two.  It’s annoying.  It’s even awkward, depending on the situation. I’m talking about the dreaded ‘Asian Flush’ 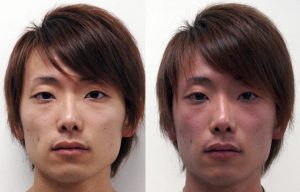 You know – that thing when your face gets red and hot to the touch within 10 minutes of your very first drink at a bar? Or you’re celebrating New Year’s Eve or Valentine’s Day with a special lady friend over a glass of champagne and you feel that familiar heat crawl over your face?

I’ve even had some Asian clients who were stopped mid-game/mid-set/mid-sentence by the woman they were talking to, only to be asked “Are you OK?  You’re really red.”

Oy vey.  Not good.  That actually happened to me once as well.

Well, of course we’re OK. After all, we’ve only had one drink! But truth be told, we don’t appear to be good when others see us, with our noticeably flushed appearance and bloodshot eyes: The Asian Glow.

This can make approaching women difficult, be they alone, in groups, or whathaveyou.

Some of you may know why it happens to us Asian guys, but let me briefly get into the science behind it for those of us not in the know.

The Cliff’s Notes Version Of The Asian Flush Is This:

For Asian bros that have this condition, that is our genetic dilemma.  And unfortunately, it sometimes translates into socially awkward situations. 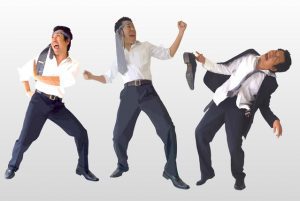 You see – in the West, there is this notion that “a real man can hold his drink/liquor”.  It’s a macho caveman concept where men can prove their manliness by drinking the most amount of alcohol possible without losing their faculties.

After a point, even non-Asians (whose bodies break down acetaldehyde more quickly) get red – and that seems to be the signal that a guy is “wasted”.  It’s OK to get wasted – but by this logic, getting wasted too quickly makes you look weak

Hey, I didn’t write the rules. I’m just telling you that people will (unfairly) judge your maturity, sexuality, and masculinity if you look like your willpower is so weak that you succumb to alcohol so quickly… Even if it’s just the appearance of the Asian Flush and Glow.

So instead of showing off your sense of humor around women, you become the butt of the joke!

So when an Asian guy whose body is inefficient in breaking down acetaldehyde gets red after his first drink, it unfortunately sends out a message: that he can’t hold his drink, and is therefore not manly, and therefore uncool.

I know – it’s ridiculous.  We feel more or less fine even though our faces turn red.  But nevertheless, that is the perception people will have.

So what do we do about it?  How can we CURE or even get RID of the Asian Flush?

The answer is so simple, you’re going to laugh.

Sounds crazy, right?  Let me explain in more scientific terms, in case you have trouble believing me who you can get rid of the Asian Glow.

PEPCID AC is not only a popular acid-reducer.  It’s actually a chemical mix called ‘famotidine’, which is an anti-histamine.

Do you recall what I just said about the metabolic by-product of alcohol consumption?  That’s right – drinking causes the body to produce a histamine called acetaldehyde.  Again, histamines are toxic, and can cause unwanted reactions like your face turning hot and red.

So if you introduce an ANTI-histamine to your system?  That’s right – you can cure the Asian Flush.

Finally!  A practical, cheap, and EASY solution to the problem that’s been plaguing you for your entire adult life.

Remember: the trick to defeating Asian Flush is to take a tablet of PEPCID AC about 45 minutes before you take your first drink.  Doing this during this timeframe – not after you first drink – will ensure best results.

So make it a part of your pre-game routine.  Take a shower, get dressed, comb your hair, put on some cologne, and pop a PEPCID AC.  Or if your drive to the club/bar is long, have a bottle or box of it in your glove compartment and take one during your drive there.

It could even a conversation starter/opener with a fellow Asian (girl) inside the club/bar.  Then have a laugh together as you toast to a fun night free of the dreaded ‘Asian Flush’!**

**(WARNING: Be careful though – don’t pound those drinks just because you don’t feel hot-faced or look flushed.  You still get as drunk as you normally would – and no one likes a sloppy-drunk! Besides, what if you pass out and some asshole draws a dick on your face as a prank? PEPCID AC may solve the Asian Flush issue, but it can’t do a thing about dickheads with Sharpies in their hand. You’ve been warned!)

To learn more helpful insights, like get ridding of the Asian Flush, that will aide you in the Asian man’s dating game, check out the bootcamps ABCs of Attraction is offering in your neck of the woods!