Nerd Bootcamp on NBC: The PUA City Upon a Hill 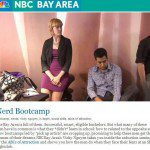 Readers, I am the bearer of exciting news!

If you are in the San Francisco area, you are already aware of this, but for everyone else, I am writing to inform you that ABCs of Attraction “nerd” bootcamp has garnered so much attention in the past few months from our university workshops and articles such as New York’s Paper Tigers article.

We all knew this, but that led to us being picked up by NBC Bay Area in San Francisco (KNTV Channel 11)! That’s right, we were followed around by a camera crew who captured us doing what we do best – helping men become better with women and their personal lives.

We were pleased to see how well we were represented (Vicky Nguyen used the term “Nerd” bootcamp as an affectionate), as the PUA industry does have a stigma attached to it. Naturally, it comes from not only people’s perceptions but companies with the wrong intentions.

At the ABCs of Attraction, we are aware of our image in this world and we strive to make sure we go above and beyond what others expect. We don’t teach you how to just get laid – we teach you confidence, self-worth, and an entire skill set that you can apply to your character to improve your entire life beyond the bedroom.

I am reminded of a quote by President John F. Kennedy:

“We must always consider that we shall be as a city upon a hill—the eyes of all people are upon us.”

Those words uttered by former President John F. Kennedy ring true for us, as ABCs of Attraction entered the homes of viewers and resonated with men, eager to change their lives and do what it takes to succeed with our holistic approach to dating.

We also hope that you represent not only our community, be it the Seduction and/or Asian American community, but yourself, to acquit yourself as a positive male role model so that everyone might look up to you as a leader and instigator of positive social change, be it in business, family, or romantic arenas.

Of course, some of you may wonder what a local television show has to do with the turning point of an international country. While I can’t say much as of yet, I will hint that this broadcast is a mere taste of the big things in store for ABCs of Attraction. We’re talking bull either.

Today, the eyes of all people are truly upon us, as we continue to move forward as a company. We would like to see you, dear readers, move forward with us.

To accommodate for our newcomers who decided to better their lives after viewing our episode on NBC, we have added a San Francisco day game weekend workshop as well as NorCal bootcamps under the tutelage of The Gareth Jones. We hope to see you with us and we thank you again for your continued support.

Bootcamps will fill up fast, reserve your seat today!