[CLARIFICATION: There’s some confusion as to the point of these articles. The point is not to seek confrontation, that’s called being a bully. Instead, these articles are to prepare you for when YOU are confronted by a man who is intentionally trying to interfere with you.]

Previously, I talked about the different types of AMOGs (Alpha Male Other Group) or cockblocks that you might run into: from the stealthy ninjas to the barbarian types. But what can you do about these douchers?

Well, I remember exactly the moment when I knew I had gotten very good at pickup…

It was in Dallas and I had approached this tall, foxy girl. While everyone was standing around, I had struck up a really good conversation and lightly kissed her in the middle of this smoking patio. Note, this was a mixed club and I was the only Asian guy in the entire place actually talking to a non-Asian girl (much less doing as well as I was). Out of the corner of my eye, there were disparate groups of Asian men hugging the walls.

I went to the bar to grab a drink and when I came back, I found her completely surrounded and under siege by little Asian guys and big white guys who had circled her like sharks circling a wounded dolphin after smelling blood in the water. Obviously she was loving this new found attention. In point of fact, many of my girlfriends have told me that they have never been hit on more in their entire lives than when they have been out in public with me.

This has happened to me on both a cold approach, where I met her that night, to going on a date with a girl and making out with her. I have SOOOOOOOOOOOOO many stories of guys trying to interrupt me as I’m kissing a girl who could, be for all intents and purposes, my girlfriend. Maybe it’s the sight of a short, average looking Asian guy like myself with a tall, willowy woman that just sets other alpha male’s teeth on edge.

I didn’t get good at AMOGGING because I enjoy it, I got good at it because I HAD to. And I’m not talking about just the bars and clubs, I’m talking about me having to deal with these cockblocks when I’m out on a date as if we were girlfriend and boyfriend.

So we are going to play it smart with grace under fire and cool under pressure. Let me introduce you to the ultimate and only douchebag, anti-AMOG and boyfriend destroying tactics you’ll ever need… 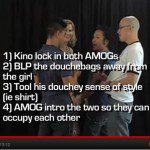 Which you can use against douchebags and boyfriends alike. It’s simply an acronym that goes in sequential order and it comes in handy when dealing cockblocks and AMOGs

He who loses his cool, LOSES. Period.

Here’s the First Rule to AMOG Fight Club… Do not go out of order!

Then you move onto ignoring and then as a last resort you can tool. Again the idea is not to necessarily go on the offensive but to be aware of these tactics so when they are being deployed against you, you know how to counter them.

So B for Befriend: you always acknowledge the man in the group. Whether you are coming into a group of people or he is coming into your set, you need to acknowledge his presence. You don’t know what kind of relationship dynamic is being played so you’ll engage in an equal 50/50 conversation.

At a certain point in the interaction, you’ll ask the tried and true (credit Mystery), “How do you guys know each other?”

Based off of their answer, you can either remain in Befriend (in the case that’s her brother, co-worker, or boyfriend) or move onto I for Ignore (like if they just met that night). For example, I once got a Scandinavian brother’s approval (while I was romantically connecting with his sister) by approaching and opening groups of girls for him. He thought I was the coolest American ever and he gave me his approval to take his own sister home with me.

Now, if you find out that they just met that night, you can then proceed to politely Ignore him out of the conversation. An advanced tactic is you can also physically ignore using BLP, Body Language Positioning.

One tactic (but is weaker) you can position yourself  in-between the other guy. However, and much better, is to position the girl so she is facing AWAY from the guy. Again these are all subtle plays while you are continuing the conversation with her, being friendly with him and all the while you are slowly ignoring him out of the conversation.

Finally, we came to the last and OPTIONAL boyfriend destroying strategy, T is for Tooling.

Again this is not something that you start off with at first. It is useful to know the kind of tactics that potential cockblocks will use against you. So let’s just get one of the biggest tactics both PUAs and Alpha Males Other Groups will use against Asians: the “small penis” AMOG Asian destroyer.

If it so happens that the AMOG will “subtly” bring up the topic of the small penis stereotype, you can say:

If a woman brings it up, then just look at her, smile and playfully say,

So… You’re THINKING about it, huh?

You’re essentially flipping the script. You’re turning a potential shit test on its head and re-framing it as sexual innuendo. In fact, William the Better Asian Man actually used this on one girl who brought it up while they were on a date. For the complete story and how he converted her, listen to our free 60 minute advanced audio CD which you can get by subscribing.

Remember, the is most important aspect  is that when you’re under attack to always, always ALWAYS keep cool. When you lose your cool, be it with another dude or a girl, you will always lose.

Another tooling AMOG tactic you can use is what I call: Super AFC Man!

So what you need to do is be very, very, VERY friendly to the guy. As he talks to you, ask him in a very very funny manner, in an almost earnest manner:

By acting like that earnest little brother who keeps pestering you with questions, you’re going to get super annoyed. But what can you do in the face of such earnestness and friendliness?

Same thing with the AMOG. After a while, he’s going to become so annoyed in the face of such oozing camaraderie that he can’t help BUT eject.

And there you go, when confronted with the douchey, roided specter of some Alpha Male of the Other Group, you have a completely field-tested methodology of dealing with AMOGs and cockblocks. It’s as easy as learning your ABCs or learning your B.I.T.s!