I receive thousands of emails from my fans asking for interracial dating advice for Asian men and the #1 question that gets asked is, “How do I know if she (usually a white girl, but not always) is interested in dating Asian men?”

As your Asian Dating Coach, however, I’m finally answering the question simply because its been asked so many times ad naseum. I’m finally going to put it to bed for the first and last time despite my misgivings. 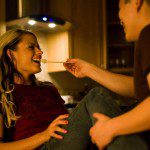 I was recently reminded of this controversial topic (and I’ll cover the reason why it’s so controversial extensively at the bottom)  on one of my many flights training men in the art of attraction when I sat next to a very pretty, blonde and bubbly California surfer kind of girl.

In our conversation, she made many of the verbal indicators of interest that I’ve heard in the past and that I’ve come to recognize as flirtatious signals from a woman when she’s attracted specifically to Asian men (and therefore to the likes of you and I).

This is admittedly a rarer form of reverse Yellow Fever fraught with it’s own dangers and one in which I’ll go more into detail in my next article about single, white females who intentionally exploit Asian men.

So here is a list of some of the things these girls will consciously do in order to let me know they want a samurai in shining armor (and while I use the term white female, the truth is other women from African American to Latin American, will also use the same flirting signals):

While having, saying, or doing just one of the aforementioned things doesn’t automatically make a girl attracted to Asian men. But combine a few of those traits or even all of them together and, gentlemen, you just might find yourself talking to one woman who is madly in love with the Asian persuasion.

Remember the #1 Rule: When you do meet that beautiful girl, always leave the woman better than you found her!

SO WHY WAIT UNTIL NOW TO ANSWER THIS QUESTION?

I mentioned previously that I was always hesitant to answer this question. I know it seems like a simple, straightforward question “What signals do white women give that says she’s approachable and receptive to Asian men?”

So why haven’t I answered it until now? Unfortunately, the act of asking the question means your LESS LIKELY TO SUCCEED with non-Asian women.

It’s a paradox. You see, I’ve always known the technical answer but I’ve always been hesitant to answer because, on a holistic level, it’s NOT empowering to Asian men as a whole to actually know the answer to that question. I believe that the thousands of men that email me with this question are displaying what is called “learned helplessness.”

Basically, the men to whom the answer to the question “How can I tell if she’s attracted to Asian men (and therefore me)?” is important, are training themselves to only make a move on a non-Asian women that distinctly signal more forward dating behavior first, before the man does. In other words, he wants a zero-risk, in the bag, sure-thing, 100% guarantee or your money back proposition.

And in today’s modern world with modern women, the last thing dating is, is risk-free.

Which means instead of being a confident, masculine Asian man willing to take risks (who would then naturally attract these women be they white, black or Latina) and playing the Asian Card to get the beautiful woman, he instead turns into the Asian beta male who is only confident if it is instead the woman who takes the initial risk. Instead of the proper way around which is the man’s role to be dominant, forward, and a leader.

I hope, however, I am not doing a disservice to Asian men by training to look, and ONLY look, for these specific female signals of attraction first before making a move… Instead of making a move first and then making her attracted to you which she then sends you signals. That’s the right way. 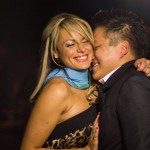 As you can see, I am a very average looking man. I am a short 5 foot 5 inches and I know I am not a good looking or handsome guy. Every woman I’ve dated is physically (if not socially) out of my league. I never get those kind of indicators of interest or signals of attraction. You should never expect them because I certainly don’t and my success with the most beautiful women has been documented and faithfully captured by the media around the world.

Instead, use these signals and indicators of interest to your “Asianness” that she’s becoming attracted to you AFTER you’ve approached her and gotten to know her. You should take these 10 Signals She’s Attracted to Asian Men as signs for you to STAY when you’re already in a conversation with her instead of viewing them as indicators for you to initially approach her.

In the long run, what I’ve discovered with women that specifically that like Asian men are either in it for relationship material or sugar daddies. They’ll enjoy being there but be careful because you’ll get tied down quickly with a girl that chose you, not a girl YOU chose, which is a gross difference.

And after answering this age old question, in my next controversial interracial Asian Male White Female dating article, I’m going to address the 13 Types of Women Who Exploit Asian Men! Yes indeed, there are women who will use the above signals because she’s only attracted to your “Asianness”, but not for the reasons that you might think.

So if you haven’t had the chance to get to know yourself and know women, then I’d save these girls for later – after all, you’re here to learn pick up, and quitting the game early isn’t fair to yourself and to the many women you have yet to meet.

Where to Pick Up Girls in: San Diego, California!