What is the B Phase? Be In The Moment, Banter & Buying Temperature

“Be a Fun MAKER.
Not a Fun TAKER!”
– Gareth Jones (Certified ABCs Instructor)

Over the years we have had thousands of students complain about how mystifying the seduction process is and how difficult it is to find out where one stands with a woman. These students have either taken programs with other companies and been left in the dark, or have simply been unable to continue struggling on their own and have discovered that there was a larger image they just weren’t getting.

It is with this, original confusion in mind that we generated the holistic structure of the ABCs of Attraction. Which is a simple, progressive timeline that applies both to individual interactions, as well as the entire frame of a relationship and it is broken down into 6 phases: A through F (the simple, but comprehensive ABCDEF structure).

In this series of articles, I’ll describe these phases and the main elements of each, explaining them all and what parts make up each.

The second of these phases is B: Be In The Moment, Banter & Buying Temperature.

Once you’ve gotten past the initial opener (A Phase), you are in-set with a girl. The rest of the world knows this as ‘Having a conversation’. With so many routine-based methodologies and a wealth of things to say on PUA forums across the world, we sometimes forget that we are simply having a conversation (albeit, a purposeful conversation).

Which is why it is so important to make a conscious effort to pay attention to what is going on in the interaction, but most importantly to HAVE FUN WITH HER!

This is a perfect example of the Inner Strength that separates the men from the boys. Because we are a holistic-method company, we don’t rely on particular tactics or routines. We encourage each person to find his own niche and to use his strengths to his advantage. 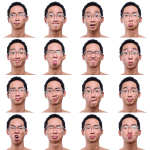 The idea is to bring together all the various elements of subcommunication that positively express your personality in a high impact, emotional manner. In other words:

The best way to do this is to Be In The Moment. Don’t focus on particular lines or games; take a step back and realize how much you’re enjoying the interaction. It’s dramatic effect on your perspective will directly effect your confidence and attitude and immediately become apparent to your target, who will see your immersion and awareness as a very spontaneous and fun personality trait!

Be someone that always GIVES value! Or, like Gareth Jones likes to say, “Be a Fun MAKER! Not a Fun TAKER!” 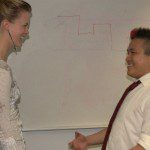 So often, women will say that a good conversationalist is extremely attractive to them because it shows a quick wit, perspective, and the ability to represent ones-self confidently. We stress this kind of Verbal Attraction (one of the three, key components of the B Phase) in order to stimulate the woman’s mind.

A man that can converse has an instant leg up. To develop this skill on your own, all you have to do is go out and talk! Talk to everyone you meet at the grocery store, at the restaurant and, especially, at the bar! Practice makes perfect and, in the case of Bantering, practice makes productivity!

A point that guys tend to forget is that people go out to clubs or bars to have fun and, as we teach, there are two types of people: fun takers and fun makers! Provide the fun that the girl came to find at the bar and develop strong Verbal Attraction like:

For those guys who’s English is not your first language and find it hard to have that comic timing and mastery of verbal humor, concentrate on crafting quick, short hilarious stories rather than rapid fire repartee. Also concentrate on the unspoken forms of humor and having fun (ie dancing, high fives, etc) like BT Spikes. 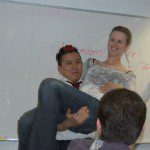 A woman’s BT is her general attraction to you and is increased by specific maneuvers called BT Spikes. These fun, witty, silly, and often very amusing physical (and sometimes verbal) tactics are what makes her enjoy herself and attach that feeling to the giver of fun (you!).

It is an example of Physical Confidence in both your body and her’s as you affect her emotionally in a positive, fun manner. For example:

By inducing a “Buying Temperature” state, you’re putting her in an EMOTIONAL RECEPTIVE mood. In other words, she LIKES you and FEELS GOOD about you.

That is why, for example, we don’t need to do the False Time Constraint (FTC), which is designed to lower her guard and convince her to not be suspicious of you and why you came up to her. These logical gambits are attempting to “trick” her brain otherwise.

We here at the ABCs of Attraction don’t believe in tricking or manipulating a girl NOR do we believe in putting in extra unnecessary work that “tries hard” to get her to stay with us.

When you “pump up her Buying Temperature (BT)”, she will already be in a good mood and WILL NOT CARE why you came up to her. In fact, by following the ABCDEF structure, she will want you to STAY! And not because of any routine you used to allay her skepticism, but because SHE ENJOYS YOUR PRESENCE!

Remember that Buying Temperature is transferable (meaning any guy can force you out of the set and take over her heightened emotional state) and it is short-lived, so once you’ve gotten her emotional by spiking her BT, you’ll want to proceed straight to the C Phase (Compliance, Comfort & Connect), the subject of our next article!